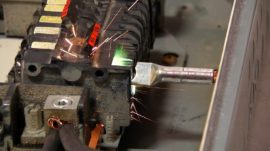 These panels have a proven history of a high number of failures and have been attributed to numerous electrical fires.
Contact the professionals at A.S. Electric, Inc. immediately in order to schedule a consultation.

If you own a FPE breaker boxes and it has never tripped, you may have a serious problem that could lead to a dangerous and life threatening fire. These breaker boxes will sometimes “lock on” even after becoming overloaded. This will cause the breaker to heat up and eventually melt and/or catch fire.

A large percentage of homes in Florida are aging, many were built in the 1950 and 1960 and were not designed for the electrical needs of modern living. If your home was built was built in the 1990s or earlier it is very important that you check the manufacturer of the breaker panel that is currently installed. Several companies produced breakers, boxes, and panels that were found to be defective, poorly designed, or are now unsafe by today’s electrical code standards. These panels may and pose a very real fire and safety hazard. The companies that manufactured and sold the problematic breakers and panels Include GTE-Sylvania/Zinsco , Challenger, and most notoriously Federal Pacific Electric (FPE) “Stab-Lok®” breakers. FPE breakers were marketed under a number of brands including “American”, “Federal Pacific Reliance Electric”, “Federal Pioneer”, and “UBI”. The breakers produced under these names have essentially the same housing and internal mechanism as the original FPE breakers. In many instances the new branding consisted of a simply applying a paper label to FPE breakers. The name changes reflect corporate ownership changes as well as their efforts to disassociate the product from the scandal-tarnished FPE brand name for the purposes of marketing and isolation from liability.

Federal Pacific Electric Company (FPE) was one of the most common manufacturers of circuit breaker panels in North America from the 1950s to the 1980s. Millions of their panels were installed in homes across the country. After many years past and multiple reports of fire and failure from electricians, inspectors, and home owners it was discovered and reported that these breakers would become locked in the on position and would not trip if the circuit became overloaded.

A circuit breaker is designed to trip during an overload or short circuit, thereby cutting off the flow of electricity and preventing a fire or potential damage to equipment on the circuit..  But if the breaker doesn’t trip, the increasing current can cause the wires to overheat, and even ignite. As these breakers would “lock-on” you could be unaware of an issue for years, but a single power surge to the breaker can cause the wires to overheat, and even ignite due to the buildup of current. This increased heat will cause components to melt and warp. This is a huge fire hazard. Over the years these breakers have been attributed to numerous fires. Some Reports estimate that 2800-3000 fires per year are related to FPE Breakers.

Firefighters around the country as well as home inspectors and even some insurance companies are aware of problems with Federal Pacific Electric breakers.  Many insurance companies are refusing to cover homes that have these breakers, and/or will not pay out an existing policy due to these breakers being installed. In several areas a house cannot be resold without removing and replacing these panels.

Underwriters Laboratories is a global independent consumer safety certification and consulting company that tests products to ensure they meet published and nationally recognized standards for safety. Products that have the UL Listed mark have been certified to meet safety standards reliably based on testing of a representative sample of a product. This certification is generally required for all electrical equipment installed in a home or business in in order to meet building and electrical code requirements.  As standards vary from country to country they will also certify compliance with various international standards and provide a seal that indicates specific standards compliance.
For more information you can visit their website at http://ul.com

UL vs. FPE, Civil Action 1956, Final Judgement  In 1956 UL brought FPE to court to force them to stop applying UL labels to product that was not listed or did not meet the UL standards, and to discontinue counterfeiting UL labels. UL had not been successful in stopping these practices through their normal business and contractual relationships with FPE.  This 1957 court document recaps UL’s complaints and constitutes the final settlement agreement reached at that time between UL and FPE.

1980 – Reliance Electric Company – Press Release – CPSC Notification – In 1980 Reliance Electric notified the consumer product safety commission of a number of defects found in FPE products. They also admited that previously the company was obtaining their UL certifications  through deceptive and improper practices. They requested all affected products be pulled from sale and tried to manage the hemorrhaging of money associated with replacing defective parts on existing installed panels. Later investigation discovered the defects and failures found in the noted products actually were systemic and affected all FPE Breakers and Panels.

1982 – Reliance Electric Company – Public SEC Filings – After acquiring FPE, Reliance Electric Company admitted in multiple public filings and court documents that for many years FPE obtained their UL certifications through “deceptive and improper practices”. These practices were essentially trying to cheat during certification. During UL certification a representative from FPE would control a panel breaker and trip it by remote if it failed to trip normally during testing. UL was unaware of the practices at time and never publicly acknowledged that it was aware of such practices while the company was still in business.

2002 – New Jersey vs FPE/Reliance Electric Company – A class action lawsuit filed in New Jersey Court found that FPE/Reliance Electric had violated the New Jersey Consumer Fraud Act, by “…knowingly and purposefully distributed circuit breakers which were not tested to meet UL standards” and cited that the company had engaged in fraudulent practices to obtain UL certification. Because of this they were liable and required to provide compensation to the members of the suit as well as a means for consumers in New Jersey who purchased a FPE panel installed prior to 1971 to pursue a claim…

Since the end of manufacturing of circuit breakers under the Federal Pacific Electric (FPE) brand, in the mid 1980s, compatible Stab-Lok® type breakers have appeared under names such as “American”, “Federal Pioneer”, “Challenger”, “Federal Pacific Reliance Electric”, “UBI”, “Federal Pioneer Limited” (Canada), and some other similar combinations. For the most part, the breakers produced under these names have essentially the same housing and internal mechanism as the FPE breakers. In many instances the new branding consisted of a paper label applied to an FPE breaker. The name changes reflect corporate ownership changes as well as efforts to disassociate the product from the scandal-tarnished FPE brand name for the purposes of marketing and isolation from liability. All branded breakers demonstrate a significant failure rate. The UBI breakers, which are marketed in the USA at this time, have the highest failure rate.

Federal Pacific Electric panels were produced from the mid-1950s well into the 1980s. FPE panels produced during that time frame would not conform to today’s updated safety codes and would no longer be allowed to be sold to the general public. Safety standards that were once acceptable years ago are no longer considered safe. Some of the examples cited by experts as to why FPE panels would not pass today’s pdated safety codes are:

Wires may be crowded inside the panel box.
(Compounds complications from overheating and arcing that lead to fire)

Bus bars may be spring-mounted.

Breakers may be still active when in the down position.
(This is a electrical shock and fire hazard)

Experts report that the identified design flaws in FPE panels are not shared with other panels of similar age. Specifically, examples of design flaws in Federal Pacific Electric panels include:

Using UL 289 test conditions, the Consumer Product Safety Commission (CPSC) found that Federal Pacific Electric panels may be unfit for homes. The materials used to construct the breakers may be weak. As a result, the breakers may not trip, and the panel could be susceptible to catching on fire.

For his complete technical report on the FPE Breaker testing conducted please see the full report created by talented engineer Jesse Aronstein. His reporting along with his testimony as an expert witness was used in many of the lawsuits involving FPE Breakers. Please visit the comprehensive fpe-info.org for additional information.

Contact the experts at A.S. Electric, Inc. if you own one of these panels or are unsure. We strongly recommend and encourage entirely replacing FPE and Zinsco panels with more reliable and up to date equipment. Generally speaking, in older homes the electrical panels were simply not built to handle the volume of electricity that many of us consume in modern times. Overloading a circuit in general is dangerous, that is why we have fail-safes installed on each circuit in the form of breaker switches that trip and cut the power when overloaded. Without this fail-safe you could have the circuit receive a surge or simply be overloaded from use and the wires will heat up and potentially ignite and start a fire. Also you could have a surge send higher voltage current down to your electronics and destroys them.

With older equipment you have to consider the difference in safety standards when the panel was installed/manufactured, corrosion of contacts/wiring and buildup, loose wire connections, aging of components, damage from overheating, there are so many things that could go wrong you are taking a big risk the longer you put off upgrading or replacing your aging electrical service and panel(s) .Especially in homes built in the 1950s-1960s and earlier.

Schedule an appointment today to replace your existing hazardous or outdated panel keep your family safe and enable your home to properly handle the increased demands for electricity needed to power your home and life in today world.

A.S. Electric, Inc. will fully inspect and evaluate your existing electrical equipment and discuss your available options with you. Allow our professionals to give you the piece of mind in knowing that your  family are safe from dangerous and deadly fire hazards and your home is equipped to handle the increased electrical demands of modern living.